Come From Away – Gerard Collins 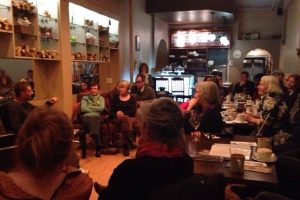 As a writer, I often get asked where my ideas come from. I like that the question focuses, not on the artist, but on the source of inspiration. My best ideas seem to come from away.

I’m a Newfoundlander by birth, as well as by design. I have been shaped by The Rock – as much by my absence from it as by living there. A few years ago, an audience member at a reading in Saint John asked why I thought Newfoundland had so many talented writers. “Writing,” I replied, “is an act of rebellion.” Those who have been repressed, ostracized, disenfranchised, ignored, or even laughed at for decades often find their voice through the arts.

We on the East Coast of Canada are waking up. New Brunswick, too, is beginning to find its voice. Some day, people will ask, “Why is there a disproportionate number of great New Brunswick writers?” I think it’ll happen. I’ve seen it happen – where I grew up, in an outport, there were no local writers to emulate. But, these days, the island is awash with storytellers. New Brunswick is a beautiful, bountiful place, but, now and then, I hear the jokes –that it’s a “drive-through province,” and the only thing here is trees – a particularly cruel line since we are losing our trees to industrial clear-cutting. We must nurture what we have, or we will someday have not.

When I was a teenager, I heard Brian Peckford, the premier of my home province, declare, “Some day, the sun will shine and have not will be no more” – words that embedded themselves in my soul. New Brunswick, too, has reason for such optimism, with plenty of great writers – the wonderful David Adams Richards and Beth Powning, and a slew of talented English, French, and First Nations scribes just emerging, and some already published. The stories must be told. Or else, when we die, we do so with the tales of our ancestors stuck in our throats. 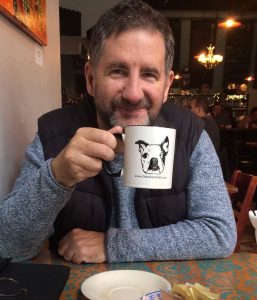 The idea for Black Coyote and the Magic Café arrived on Christmas Eve 2015 as I had breakfast at a restaurant in Sussex. It was snowing outside, and I’d planned on a morning of last-minute shopping. Instead, as I stared ahead at the wall of the diner – in a different spot than usual – I had, as I call it, my “J.K. Rowling moment” when I wasn’t thinking of writing, but the writing found me. For the next two hours, I drank coffee and scribbled notes, as if in a trance.

The scene before me shifted to an alternate reality in which the waitresses were witches whose mysterious employer paid them a million-dollar salary to work at this magical café. They didn’t accept tips, and sometimes, eschewed payment. They refilled your coffee and gave you free bacon as long as you proclaimed it “the best” you’ve ever had. This place was a mecca for writers, artists, musicians, and magical folks, and this newcomer – a writer who suffered from writer’s block that came from a terrible tragedy – had an epic role to play in the lives of these people. The black coyote in the story is based on an animal I once encountered, that has since become my predatorial muse.

That winter, I taught by distance at Memorial University and had many deadlines. So, I put the Magic Café aside, with intentions of coming back to it in summer. Meanwhile, that spring, I applied for, and received, an artsnb grant that made all the difference. Being a full-time writer isn’t an easy existence, but it’s one in which the rewards are innumerable and vital, to me.

Ironically, while I composed that first draft, I received a concussion that, for several months, impaired my ability to write or even to earn a living. But I’ve found that when an idea is essential to you, you’ll find a way to get it down. I finished that first draft, and the story has been told, never to be untold.

So, my ideas rarely come from within – but they gain life from inside me. They fly into my brain, nest in my soul, and gestate until they are ready to take flight once again. With eyes that glint, they spread their wings and flash their colours. I don’t go looking for ideas. I’ll see a newspaper headline, overhear a conversation, or remember a childhood friend – or sometimes, a room will transform itself into something I never knew existed until that moment, and that’s when the writing becomes both an excavation and an exploration.

This latest novel marks the first time I’ve set a novel in my adopted home province of  New Brunswick. I’ve been here long enough now, that the ground beneath me reverberates with passion, the ever-shifting sky shimmers with meaning, and images of the future arrive with an undeniable invitation to tell these stories, to participate in the return of the repressed – to find what was lost, to remember a strength that was once forgotten.

The compulsion to write comes from within, but the best ideas come from away. 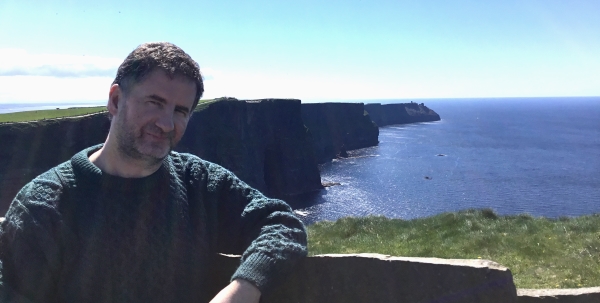 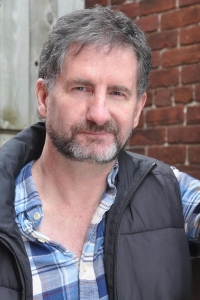 Gerard Collins is a Newfoundland-born writer living in New Brunswick. His first novel, Finton Moon, was nominated for the 2014 International IMPAC Dublin Literary Award, 2013 Sunburst Award for Excellence in Canadian Literature of the Fantastic, the 2014 Newfoundland and Labrador (NL) Heritage and History Award, and won the Percy Janes First Novel Award. His short story collection, Moonlight Sketches, won the 2012 NL Book Award. Gerard, who holds a doctorate in North American Gothic literature, has won numerous literary prizes, published in journals and anthologies, and had his work adapted for a radio play. He often leads creative writing workshops and retreats, regularly serves on arts juries, and mentors writers of great promise, from across Canada. Gerard lives in a cottage beside a lake where he teaches university courses by distance and writes.

In 2016, Gerard received an artsnb grant to write the first draft of his novel manuscript, Black Coyote and the Magic Café.

The artsnb blog gives a voice to New Brunswick artists. Have you received a grant from artsnb? Are you interested in sharing your artistic experience? Then please contact us now! 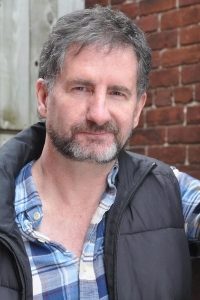