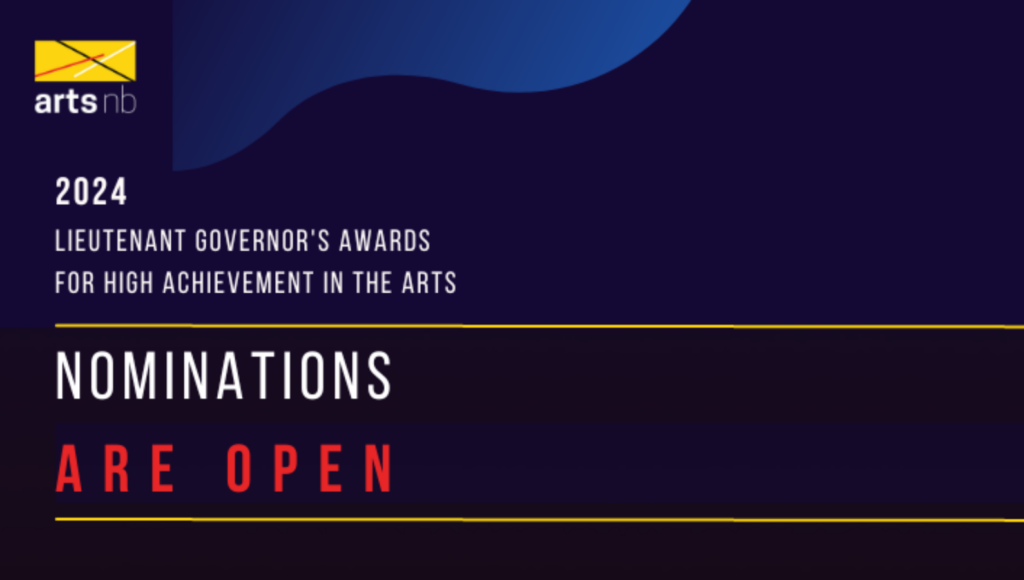 2024 Lieutenant Governor's Awards for High Achievement in the Arts

The call for nominations is OPEN until July 1, 2023.
MORE INFORMATION HERE 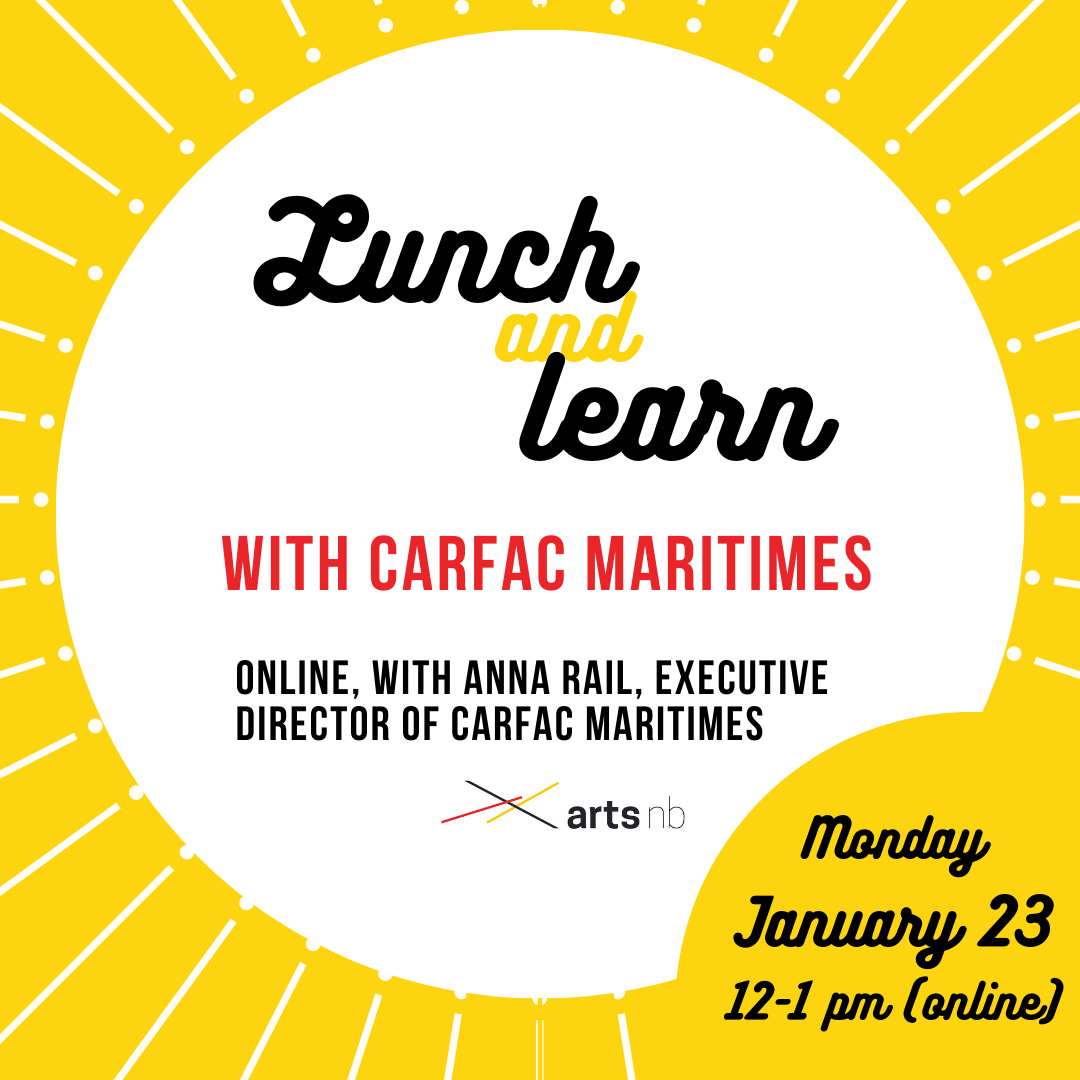 Lunch and Learn with CARFAC Maritimes

Visual, media, and craft artists, learn more about the organisation acting as an economic and legal defender of professional visual artists in Canada: CARFAC. Bring your lunch and join Anna Rail, CARFAC Maritimes’ director ONLINE on Monday January 23 at 12pm for a Lunch and Learn about CARFAC, copyright, and best practices. This event is 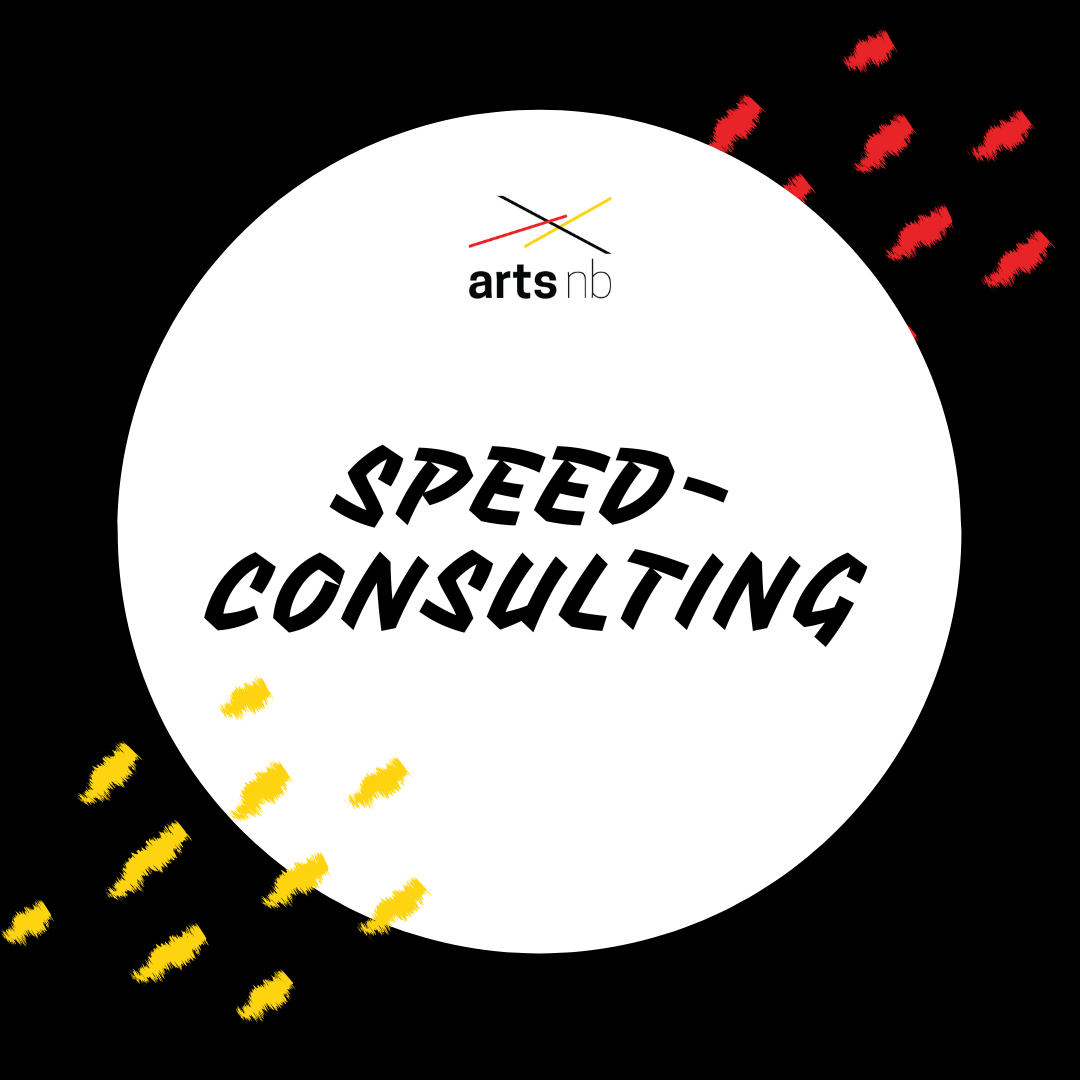 Having questions about the next deadlines coming up? artsnb launched a new initiative in September 2020: its online Speed-Consulting sessions! *NEW* Every 2nd and 4th Thursday of each month, from 2-4pm, you can ask any questions you may have about our programs without the need to book an appointment with a Program Officer. Drop by 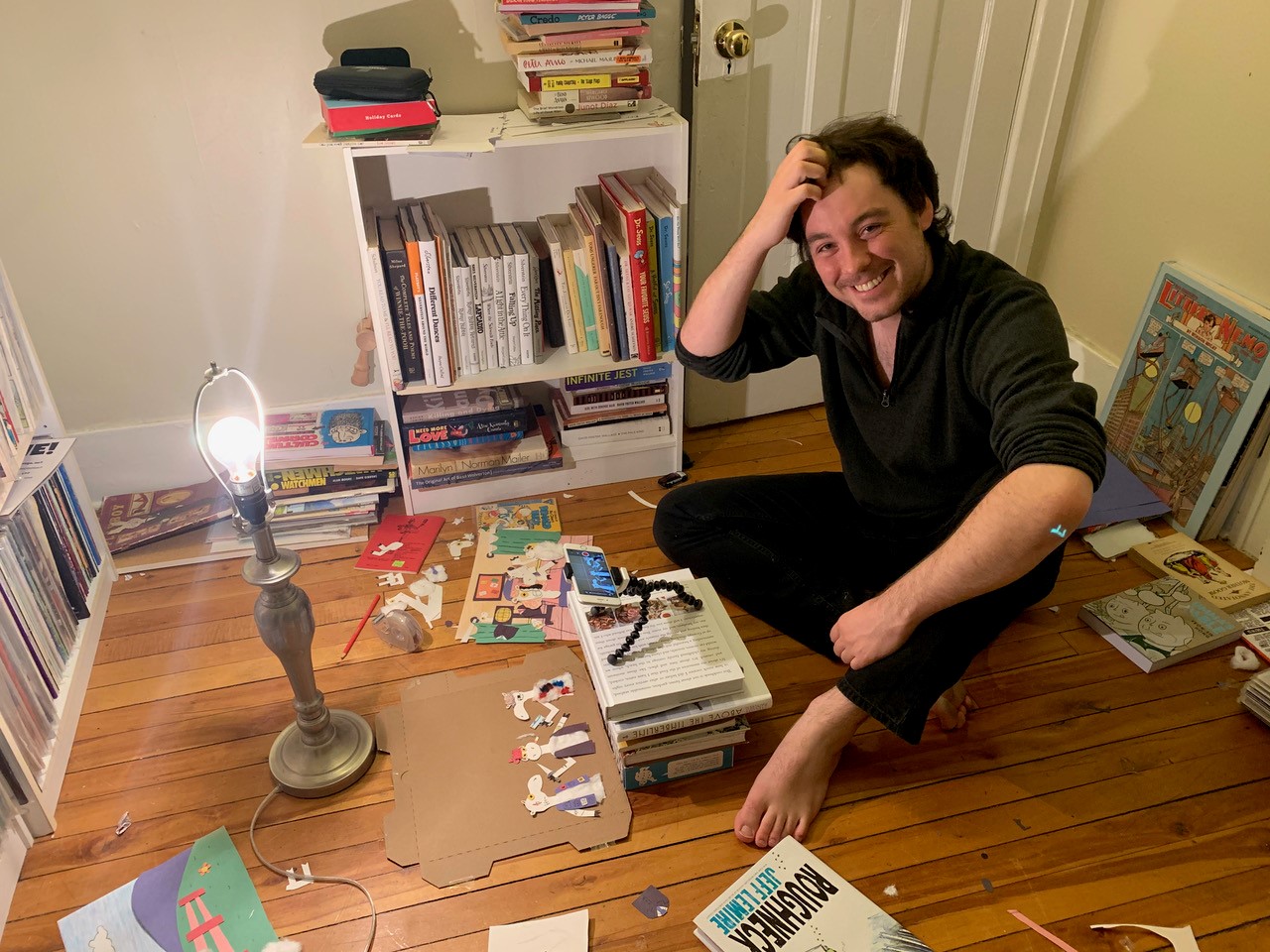 Writing ‘The Fish That Ruined Everything’

If quality was a factor, I was hardly a discerning consumer. As a child, I was a fan of every movie, and mesmerized by every book. Even flyers and printed newsletters held a bizarre fascination for me. Let’s put it this way — I list Coffee News as an influence. Not so much for its content, but for its proliferation in every cafe, restaurant and auto shop in the greater Saint John area. People would actually pick up that yellow broadsheet overstuffed with advertisements and read their horoscopes while sipping coffee and waiting for their tires to be rotated.

As far back as I remember, I have wanted to make something that drew that kind of attention.

See, I turned twenty-nine in December, and so my formative years were spent on the internet during the early aughts, at a time when the internet had become really good at collecting and cataloging media, but not so great at producing it. So, a young aspiring artist could learn all there was to know about comics, films and video games without being overwhelmed by the glut of content that exists today, where incredible entertainment is easily accessible on one’s phone.

Lest you think I’m harkening back to a “better time,” I fully acknowledge that I would have likely floundered and failed in the old media landscape. As it stood, I began finding opportunities in high school — editing the student paper, producing a college radio show and blogging. Then, at Saint Thomas University, as I was trying to meander my way through a Journalism and/or English degree, I took up cartooning, online publishing and theatre directing.

My approach to these things was not polymathic. It was desperate. I wasn’t so much good at these things as I was eager to be a part of them. Fredericton is a great environment for this. You can try just about everything — and I did.

While I lacked an innate talent for any particular medium, I was able to determine that writing was the common denominator. I figured that if I zeroed in on that particular skill, then I could continue to “make things” professionally. Thanks to that “new media landscape,” this proved to be true. Kind of.

After receiving my degree, I began slumming it at a marketing position for six months. I left that for a pair of editorial positions at online publications that lasted for about as long as such things do. Following this, I began a rigorous freelance cycle of copy writing, journalism, playwriting, filmmaking, speech writing, and illustration.

Writing was always at the centre of whatever I did, but it was never the main attraction. It always took some mutated form. Why? Writing for writing’s sake just wasn’t profitable. Who has time to draft their “dream project” when every gig needs to pay through to the next?

Making a mess while animating the short film “Counting Sheep”. Photo: Courtesy of the artist.

In September of 2021, I began tapping out a few chapters of a short novel about a fish who wanted to break into the local industry of a small fishing town. It was silly, weird, and thoroughly unmarketable. It was exactly the book I wanted to write.

But, I also wanted to — y’know, eat. So, I put the book down and got back to the business of freelance. I sent in an application for an artsnb creation grant, and crossed my fingers.

Concept Drawing for ‘The Fish That Ruined Everything‘.

Sure enough — I got it! Two months later, I got the funding and immediately dove back into the project. While I still took on plenty of projects, I was always able to come back to the book, giving it the attention and care it needed without feeling guilty or fearful that it wasn’t going to pay off, financially.

Drawing at the Saint John Night Market. Photo: Courtesy of the artist.

Promotional image for ‘The Fish That Ruined Everything’. Photo: Courtesy of the artist.

I finished The Fish That Ruined Everything back in August. I added some illustrations, formatted the book to my liking, and released it. It’s out — finished. The reaction has been positive, and it has received coverage in both the Maritime EDIT and Grid City Magazine. It might not become a bestseller, but — worst case scenario — I could always drop off a few copies at my local auto shop.

Thanks to artsnb, I was able to get a dream project off the ground and ensure that I was putting my best foot forward as both a writer and artist. Because of this, I once again find myself inspired in my work, and I have been able to approach freelance with renewed interest and vigour.

For once, I am creatively satisfied. Until the next project, anyway.

Brandon Hicks is a writer and artist based in Saint Stephen. His work has been featured in the Maritime EDIT, Fangoria, National Lampoon, CBC and several other publications, including The Rumpus, where he served as Comics Editor for seven years. His plays and short films have run in international festivals, and he is the author/illustrator behind several books, including the Beezle, Buzzle and Barb series for New York’s Humorist Books imprint, The Manatee’s “That’s Not True!” and the novel The Fish That Ruined Everything.

Stay up to date with Brandon’s practice: