“I actually think that the idea of an individual writer is bull****. All writers are collaborating. They are all talking to other people. They might go home and write by themselves, but they didn’t create their text alone. All writers are part of a bigger fabric.”
– Catriona Strang

When I moved to Fredericton four years ago, I started to think about how I might be able to rework my solo show, Piecework: When We Were French, for a Maritime audience. That show was originally commissioned for a festival in my hometown of Burlington, Vermont, and was intended to explore the influence of French-Canadian culture in the northern New England. Based on interviews I conducted, as well as research and my own family history, it consists of a series of monologues by Franco-American characters, struggling to articulate their relationships to their heritage. The theme of culture and identity in the French-Canadian diaspora seemed like it would resonate in New Brunswick, but the show had been written for a New England audience. Would a Canadian audience have enough of the same context to understand where the show was coming from?

Context. The word comes from Latin, “text” from the word for weaving, and the prefix “con” means “together.” Context is a fabric, woven around the thing itself, without which the thing cannot be properly seen or understood. All of us are woven into such a fabric — a family, a community, a history. These connections deeply influence who we are but can be difficult for us to see from our place within them. Context, I realized as I wrote, is related to subtext (“sub” from the Latin for “underneath”). For the actor, subtext is story beneath story, the dynamics that drive our behaviours, the motivations that push dialogue and dramatic action along like a current. I became obsessed with how deeply context and subtext are intertwined — woven together. What we are and what we are surrounded by are echoes of one another.

Theater is not a solitary artform, but when I received a Creation grant from artsnb this past spring, I had been working on a profoundly solitary basis.

What had begun as an effort to reshape my older work had instead given birth to an entirely new project: a show that traces the history of francophone peoples in what is now the United States, but also questions how we use stories (and histories) —about our national and linguistic identities, our citizenship, our ancestry, and our own personal lived experience— to define ourselves and divide ourselves from others. After more than two years of work, a show was taking shape that would explore the dangers and pitfalls of the very human tendency to use storytelling to weave ourselves into the fabric of time and place. But I knew I couldn’t make that show all alone, in my house and my head, as I had been doing.

Although solo performance has been central to my creative practice for the past ten years, I never expected to go anywhere near it. Theater’s fundamentally collaborative aspect is one of the things I most love about it as an artform. I spent my early career working in companies and ensembles, and the friction created through collaboration shaped my sensibility and my skillset. No one artist “owns” a theatrical production — and I mean this in a deeper sense than the old adage about small parts and small actors. In a well-done show, cast and crew move as a single organism and communicate, like musicians, through rhythm and movement, beautifully interdependent. Solo work had always seemed to me to be a violation of this sacred principle. But since I’ve been doing solo work, I’ve learned that, surprisingly, being alone on stage magnifies one’s dependence on collaborators. Making a solo show is like trying to see yourself without a mirror. You must rely on other people’s eyes to see what you’re doing. No kind of theater is a solitary endeavor, but the solo performer is paradoxically, acutely aware of the supportive infrastructure that surrounds her: a director who witnesses rehearsals and helps to shape a performance, designers who participate in the conception of the show, technicians who are the actor’s ultimate safety-net, and of course, the audience, the solo performer’s scene partner. I knew that I couldn’t make a show all alone in my house and head, but being relatively new to New Brunswick, those had been the terms.

One of the challenges of working as an artist in New Brunswick is that, since there is not a lot of traffic moving through the province, there is not a lot of fresh energy coming into artistic spaces and not a lot of turnover or disruption in audiences or arts communities, which means that they can sometimes be insular and unused to incorporating new arrivals. I found it difficult to make inroads and find collaborators here at first. All of us labour alone at least part of the time, but our work only becomes truly real when it is shared with others. My Creation grant arrived at a critical time in my project and my career, and made it possible for me connect with fellow artists and audiences in a way that I hadn’t been able to before. Just as importantly, it’s helped me to finally feel less out-of-context and one step closer to becoming a New Brunswick artist.

Abby Paige is a poet, playwright, and theater maker whose work often traverses borders between countries, languages, peoples, and generations. Her writing has appeared in both countries, in publications including the Arc Poetry Magazine, Room Magazine, The Los Angeles Review of Books, and The Montreal Review of Books, as well as the recent anthology, Heliotrope: French-Heritage Women Create.

Both of her solo shows explore Franco-American history and how we use storytelling to shape identity: Piecework: When We Were French is available for on-line streaming, and her new bilingual show, Les filles du quoi?, has received support from artsnb and the Canada Council for the Arts. A tenth-generation settler to Turtle Island, Abby was raised near the Canadian border in northern Vermont. She immigrated to Canada in 2008, 100 years after her great-grandparents immigrated in the opposite direction. She currently lives in Fredericton. You can learn more about Abby’s work at her website, http://www.abbypaige.com/ 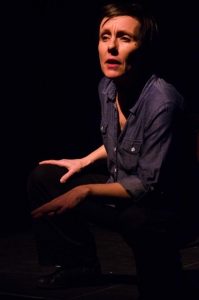