The Toronto-based F4A collective facilitates the Site + Cycle project, a residency that combines analogue filmmaking instruction with teachings about site specificity at Artscape Gibraltar Point on the Toronto Islands and at Anima Casa Rural in Mexico. Participants have produced films that explore the regions’ histories, topographies, and vegetation, and shared knowledge of organic plant- based film processes.

Feb13. A man at the airport asked me what I do for a living and I said nothing. He repeated “the big nothing” to himself – sort of like Seinfeld.

Feb14. Arrived in Mexico late. We drove about an hour from Guadalajara to San Isidro Mazatepec. I was awake for 24 hours. I could faintly make out palm trees and the rest of the property in the dark.

Feb15. Introductions amongst the group and a small tour of Anima Casa Rural. The weather is warm, but the people that live here are wearing sweaters. Beautiful place, lots of animals, good studio space.

Feb16. We ate around the fire pit in the evening. Apparently they slaughtered a goat the day before I arrived. One of the participants is making a film about it.

I did a few camera and processing tests. My first super 8 roll was messed up but kind of interesting, and my K3 doesn’t seem to be working properly. There is some image though, I will try again with:

Feb17. We went into the local market and I bought a few supplies: picture frames for the glass, vinegar, coffee, and bleach – all for processing and contact printing. Ate birria at a local restaurant. I had been practicing basic Spanish for weeks but every time I tried to think of what to say, French came to the tip of my tongue [which I also don’t know how to speak].

Feb18. The glass improved contact printing results and the K3 is working. I appreciate having no other distractions and dedicating myself full-time – even more so being in conversation with texts and peers that share extremely esoteric avant-garde filmmaking ideals.

Feb20. I’m enjoying the readings. Interesting context and history for the kinds of processes we’re going through – making developers from local plants, fixing with salt, burying film, etc. Discussion of technological obsolescence has me thinking about the project I’m working on as some kind of exploration of a broken camera’s perspective – that’s the jumping point at least.

Feb22. Great workshop on phytograms. Dawn George initially introduced this to me after learning about it at the Film Farm from an artist named Karel Doing. It’s sort of a chemigram-y, photogram-y process with plants. Spending a lot of time in the darkroom or leaning over an optical printer can be tiresome, so engaging with processes where you can be out in the sun is great.

Feb23. We visited Los Guachimontones about an hour or two south of San Isidro Mazatepec and had a picnic. It’s an archaeological site of the Teuchitlán tradition that features beautiful pyramid structures. I shot a roll of film and probably photographed the site for 15 seconds and then shot the rest while riding in the back of the pick-up truck on the way there. Typical.

Feb25. Three sheets to the wind drinking tequila and editing last night. I taped the whole film to the wall in strips.

Feb27. Full day in Guadalajara. Took the bus/rail across the city and checked out galleries, markets, cantinas. Was walking around with 500 pesos literally hanging out of my pocket for an hour. We had the screening at estudio teorema. The space was amazing and there was a modest crowd. Committing to finishing a project on such a short timeline was invigorating.

Feb29. At LAX a lot of people had masks and gloves and sanitizer and divided feelings of fear and skepticism. Surprisingly I was able to watch Kaneshsatake: 270 Years of Resistance on the plane. At the Toronto airport I was asked several accusatory questions and then warmly welcomed.

A huge thank you to Anima Casa Rural, the F4A Collective, and ArtsNB. For more information go here: http://www.filmforartists.com/ or here: http://animacasarural.com/

Todd Fraser knits, makes films, previously worked as a catholic altar server and in an artist-run centre, and his grandfather learned to dance in a dream. His work has screened across the country, from Victoria to Antigonish. He lives in Sackville, New Brunswick. 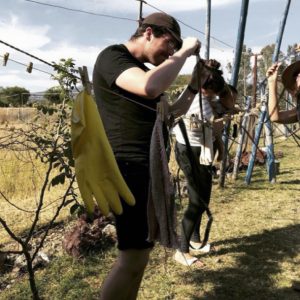