Martin Daigle is an interdisciplinary artist who is heavily involved in research and creation within audiovisual art forms. Having received several scholarships from artsnb over the years, he recently completed his Master’s degree program in classical music at McGill University in Montreal, and is currently enrolled in McGill’s Schulich School of Music Doctorate Program. As doctoral candidate in contemporary percussion at McGill University, he innovates as a performer within a variety of musical contexts.

“A mind is like a parachute, it doesn’t work if it is not open.”

This philosophy is echoed in Martin’s approach to musical performance, as he tries to interact with all kinds of music. To improve his craft, he studied a variety of musical genres as well as a variety of pedagogical approaches. He is a student of traditional tabla drumming which is a sacred percussion instrument within Indian culture. Classical Indian music does not work within the same rules and boundaries of Western music; moreover, this art is taught purely in oral tradition. In 2019, he traveled to Israel to learn from Yoni Madar, who has an approach based on Middle Eastern tradition. The richness of Yoni’s pedagogical approach was based on the fluidity of movements and the fluency of musical ideas.

As a performer, Martin has appeared in festivals including: Acadie Rock, Congrès Mondial Acadien 2019, FestiChoeur d’Acadie, Halifax Jazz Festival, Harvest Jaxx and Blues, ImaginAIR International Festival, Inspire, Indian River Festival, Mud City Meltdown and Rythmopolis. He performs a variety of musical genres with a variety of artists; though, he is mostly known as an up-and-coming classical percussionist and a rock drummer.

As a researcher, Martin recently worked on haptic-enhanced drum-kit learning. The research paper entitled “Haptic Tutor—A haptics-based music education tool for beginners” is a case study on drum kit learning. The investigators evaluated how vibrating bracelets secured to the limbs of the student could facilitate the learning of drumming patterns. This study was published and presented at the International Workshop on Haptic and Audio Interaction Design in 2020. By providing additional haptic information to the drum lesson, the learning of drum set performance may be more accessible to students who have learning disabilities.

In 2021, Martin will release his first solo album entitled Mossy Cobblestone; a title symbolizing the effect humans have on the stability of the earth’s climate, with a musical timeline. Martin will also appear as the drummer and percussionist in the much-anticipated debut album of Les Moontunes.

Read about the research he and a few colleagues conducted on haptic-enhanced drum-kit learning HERE.

Listen and watch him play Blade; a piece by Benjamin Finley which features quick rhythmic changes as well as an interesting use of polyrhythms (a simultaneous use of two rhythmic voices):

Plus, you can watch this video of Stop Speaking. Stop Speaking is a composition for solo snare drum by Andy Akiho. The composition features Vicky, an automated text-to-speech persona in conversation with the performer throughout the piece.

Find Martin Daigle online and stay up to date with his practice: 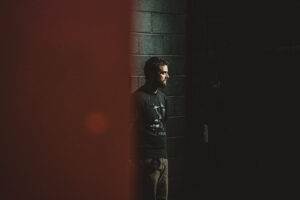