My name is Robin LeBlanc and I have been a musician since the age when my mother left me at the sisters’ convent in Bathurst to study piano at Université de Moncton. In other words, I did 7 years of classical piano training between the ages of 7 and 14.

I started playing drums at the age of 14 and we recorded an album under the name “Third Karma” when I was 18. After a year of study in France at University of Poitiers, I started to play the violin once I returned home. I traveled making music in more than fifteen countries from Hungary to Ireland, Morocco, Turkey, and Mexico, to name a few musical traditions that will influence what I do today with my children.

In 2005, I spent a few months in Cape Breton learning Scottish fiddling. After traveling between Newfoundland and Gaspe via the Magdalen Islands, Prince Edward Island and New Brunswick to record the oldest fiddlers found in villages, I had the idea to record a first album of old pieces entitled “Sur l’an premier”.

The choice of songs for this first album was made by consulting several tradition bearers and traditional music enthusiasts in order to know what had already been recorded or was known in the Irish, Scottish, Quebec and Cape Breton repertoires. I chose only unknown pieces of these repertoires, thinking that these pieces were either very old, compositions, pieces played for forgotten or old-fashioned dances, regional and family pieces that have not been recorded or, pieces judged altogether “without interest”.

It was in 2016 that I brought my family with me to France to participate in the World Traditions Festival in Gannat, Auvergne. My three daughters had learned several Acadian songs as well as the jig for this occasion. For us, it marked the starting point of La famille LeBlanc. In 2017, our three daughters started playing an instrument: the violin for Charlotte, the English concertina for Rosalie and the Irish flute for Mélodie.

In 2018, we participated in a festival in South Korea and in 2019, we did a small tour in France. Then, in 2020 we produced our first album under La famille LeBlanc. This album entitled Trois jolies demoiselles [Three pretty ladies] was recently nominated for the Trad/Folk Album of the Year category at the East Coast Music Awards 2022 (ECMAS).

In parallel to the success of La famille LeBlanc, in 2021, Nicolas Basque and I started the pre-production of a new album entitled Fille que moi. We have been working in collaboration with Julien Breau so that the melodies, the musical accompaniment and the songs of the album be written to be able to share the musical pieces; the traditional music being shared over time by ear. We are preparing with great enthusiasm for the recording and are looking forward to the next step as we have just received a substantial grant from the Canada Council for the Arts to produce this album. We are also very grateful for the three Career Development grants we have received from the artsnb, which have allowed us, among other things, to gain exposure and launch our musical career.

Robin LeBlanc is a multi-instrumentalist musician from the Chaleurs region of New Brunswick. He specializes in traditional Acadian-Celtic music. Robin has performed with his family on national and international stages such as the “Cultures du monde” festival in Gannat, France and the “Danoje” festival in South Korea. He has received awards from the New Brunswick Arts Board and the Canada Council for the Arts. With the collaboration of Nicolas Basque, Robin LeBlanc will be producing his second album this winter with La famille LeBlanc. 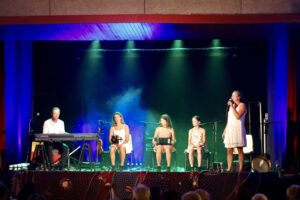