Home » News » Uncategorized » Acadian Music Under the Lens of an Ethnomusicologist

Acadian Music Under the Lens of an Ethnomusicologist

Dr. Dariush Zarbafian is an ethnomusicologist, composer, instrumentalist, researcher, and writer based in New Brunswick. In 2021 he received an artsnb Documentation Program grant to produce a theoretical work entitled The Origin, Evolution and Originality of Acadian Music. This work analyzes the structures of traditional Acadian music to extract their characteristics with the purpose of identifying the period in which these pieces were created. This work, currently awaiting publication, could become a source of inspiration for new creations as well as a reference for musicians and researchers. But first, Mr. Zarbafian explains how he became interested in Acadian music.

Origin of the research

I discovered Acadian music as an ethnomusicologist while teaching in the Music Department at the Université de Moncton. I was interested in studying its tradition, its history, its evolution, its organology, its musical transmission, and in particular its originality. The challenge of this music is linked to the mix of imported music and those that were properly invented by the Acadian people.

To study this challenge, I organized the first meetings at the Department of Music at the University of Moncton, and then I took the initiative to organize an international colloquium “Acadian Traditional Music at the Crossroads of Western Classical Music”, from October 11 to 13, 2013, with the collaboration of Cape Breton University. This colloquium was very successful, with 34 researchers coming from Europe, Australia, the United States and Canada.

Then, in collaboration with the Centre d’Etudes Acadiennes Anselme-Chiasson (CEAAC), I interviewed musicians, historians and ethnomusicologists on this subject. The result: an audiovisual archive that now exists at the Centre d’Etudes Acadiennes Anselme-Chiasson (CEAAC). In addition, I supervised five research projects with students from the Department of Music at the Université de Moncton focused on Acadian music.

Finally, the discovery of a repertoire composed entirely of manuscripts dating from 1926 to 1928, preserved at the Canadian Museum of History in Ottawa, shows us the first original musical pieces composed by the Acadians. I have currently classified this repertoire as follows: musical transcription with explanations, full conversion to PDF format and audio.

Before addressing the question of Acadian music as “traditional” music, I would like to preface my presentation with the spirit of present and past studies. The research I am conducting is obviously in the discipline of ethnomusicology. Like any scientific study, ethnomusicology has its particularities, and we will see later the ambiguity of a differentiation with musicology itself.

This being said, I would like to add that I also use the methods borrowed from ethnomusicology to define certain notions and to analyze musical pieces in contemporary Acadian music. In fact, from the point of view of our positioning, I divide my work into two parts:

The objective of this project is to produce a theoretical work by studying Acadian music from an ethnomusicological point of view, that is to say, by analyzing the structures of the musical pieces, extracting their characteristics (which makes it possible to identify their originality), and the period in which the Acadians produced their own compositions. This work can thus become both a reference for all musicians or researchers, with regard to the history of Acadian music (the past) and also a source of inspiration for new creations (the future). It can of course also be the subject of university studies and teaching, in particular at the Université de Moncton (transmission).

The origins of Acadian music can be traced to French folk songs imported from France. Over the centuries, the Acadians who settled in Canada gave birth to a new music called “Acadian music”.

French-Canadian-Iranian composer, performer and musicologist, living in Moncton. A master of the Tombac (zarb) and the remarkable Santour, he has acquired mastery of these instruments from the most eminent masters.

His approach gives his music a role and influence that extends beyond Persian music to a much more universal language. Virtuosity, sensitivity and depth give each of Dariush Zarbafian’s performances a special intensity. To date, he has produced a large number of works, both traditionally and freely inspired. These works make him one of the major figures of Persian music.

In addition to his artistic practice, Dr. Zarbafian has been engaged in personal research for many years, which has led to a doctoral thesis in ethnomusicology under the direction of Simha AROM, Director Emeritus of the CNRS in France. 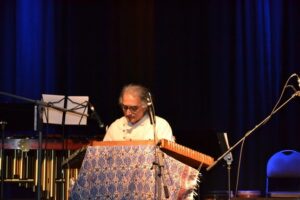