While Antonine Maillet’s first novel, Pointe-aux-Coques appeared in 1958, Moncton-born writer, Ronald Després’ poem collection, Silence à nourrir de sang, was also published. The publication of these two works marks the start of Acadian literary modernity. Maillet’s literary career is well known, but Després’s is much less talked about today, yet it offers us a very strong literary work that deserves to be revisited.

Le Scalpel ininterrompu, Després’ only novel, is a personal diary written by Dr. Jan von Fries, to recount the evolution of his quest for personal fulfillment. A man passionate about science, Von Fries embarked with Miss Mesméra, his infamous sidekick, in the practice of vivisection (dissection performed on a living animal) and would like to practice it on humans. It is his destiny, his reason for being: to cut up the bodies of men, women and children repeatedly. It is a striking work that is hard to imagine having been published in 1962 by an Acadian.

If some see it as a metaphor for the rise of a totalitarian regime, or of the rejection of forbidden sexual behavior, I see it as the rise of individualism in all its greatness. We live in a world where, ideally, everyone is encouraged to flourish without harming the individual development of others. What is we were to harm other in order to really be what we are meant to be? Le Scalpel ininterrompu is certainly not intended to be the apology of serial killer doctors, but the celebration of the personal development through the story of this mad scientist.

So why would you want to make a theatrical adaptation of this, with an artsnb Creation grant? Because Després leaves us some clues that suggest that his story would have been thought of first for the theatre. At first, he titled his book “Sotie”. The Sotie was, in the Middle Ages, a satirical farce performed by jesters with impunity in public squares. That’s theatre. Then there is the first sentence of the book: “I read Lorca”, that Von Fries writes in his diary. He then made numerous references to Frederico Garica Lorca’s play Les noces de sang. This is not trivial, as this play suggests key points to understanding Von Fries’ character. Finally, there are many dialogues between the characters that are reminiscent of reading a play. For all these reasons, and also because there was no professional theatre environment in Acadia when Després wrote his work, I felt challenged to make a theatrical adaptation.

So that’s the bet I’m taking. However, it is impossible to respect and be entirely faithful to the novel. My creative process and the wise advice of the playwright Louis-Dominique Lavigne allowed me to see that choices had to be made. The novel, although not very voluminous, could be the subject of the two distinct theatrical adaptations: the genesis of the vivisection experience for Dr. Von Fries, and the vivisection he made of the whole of America thereafter. I focused on the first half of the story. It takes place in on setting: the house of Dr. Von Fries. There is a clear goal for the main character: to vivisect a human; and a defined time: about a week. The conditions for migrating the narrative to the theatre are apparent.

Adaptation forces me as well to use the bistoury and vivisection, not of a human, but of Després’ work. I played with shreds of texts scattering here and there on my worktable to make it a kind of hybrid creature presentable to a troupe of actors and comedians. The work does not stop there, it has only just begun. To follow…

Xavier Lord-Giroux is originally from Dieppe. With an arts degree in drama (Moncton 2013) he is currently applying for a master’s degree in literary studies at the University of Moncton. From 2016 to 2017, he was acting president of the Société Nationale de l’Acadie (SNA). He has a professional practice in theatre and has become known by the public for writing and directing his work Foreplay/ Les préliminaires in 2018. 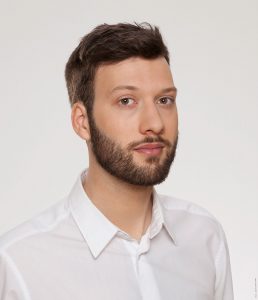