I applied for funding towards completing a new body of work in Bronze for an exhibition as well as to continue explorations through new technologies, material and scale. I wanted to spend time developing a concept that revolved around ceramic forms found in my past work in clay, reaching back 30 years but involving new ideas. I have produced a series of wax cast forms

I began this project by making molds from pottery forms that I threw years ago, some as early as 1990. Traditional raku fired pottery which was my trademark at that time. I poured sculpting wax into these molds to produce copies of my pots, then began to deconstruct by piercing them with holes, letting light flow through and cast shadows. Using patterns found on Sea Urchins, tiny holes and bumps in regular patterns, I became absorbed by the absence of the shell, intrigued by the light and shadows. And I have asked the foundry to indulge me by continuing my deconstruction process through failures. Being able to go there, to talk with the people who are taking your work the next step, is critical. I have just delivered these wax forms to the foundry in Quebec for casting in bronze. They will need additional work – chasing, grinding and patina when I get them back. This bronze work will be for the exhibition at the Saint John Art Centre in the fall of 2020 along with Ken Waiwood and Dick Klyver. I was able to visit two art casting bronze founderies in Inverness, PQ. and have much to think about as to where this project will go next. The scale of what can be done is impressive. The time for completion is long, and I will be patient.

A second part of this project was intended to work with scale, and technology. I wanted to see how using computer scanning and printing might impact my work. But I wanted to retain the hand mark of the maker, to not design using the computer. To use it as a tool to adjust scale, not to create. This is where I felt blocked. Scanning technology is not as accessible as printing technology. Most computer printed work has been designed on a screen, untouched by the hand. And sitting in front of a screen held no creative appeal to me. But it was because of researching this direction that I found a high tech, low tech solution that has sent me charging off in a completely new direction. This came in the form of a hand held, 3D printing pen. Removing the computer interface completely, and allowing a direct, hands on approach to a modern technology. These pens were designed as a result of frustration over 3D printers failings, missing bits during 14 hour print jobs that needed a restart. The computer operators just wanted to pull the print head out of the machine and fill in the void, a simple concept really. As a result, they have created a small, hand held device that extrudes melted plastic with tiny motors and various nozzles. A bit like a glue gun on steroids, but capable of a variety of materials, and fine detail. And best of all, in complete control of my hand, not a machine interface.

I found myself working with clear PLA, plastic. Not only having the light pour through my ceramic to bronze vessels, but through the material itself.

Using the same ceramic forms as the bronze, I began exploring both the pen, and the material. Based again on a Sea Urchin, the regular pattern of a spherical form divided by ten, alternate repeating patterns of bumps and holes, but this time with the addition of transparency. I am drawing sculpture. Not in the air, but using forms to construct pieces which can be welded with more drawing into larger pieces. Figuring out structure, learning how little material I can use and still create my objects. Learning to remove the exterior visually and make the internal structure the object. Changing scale by making larger segments on styrofoam molds. And suddenly seeing flying machines in what I was producing. I am excited by the possibilities, by how the light interacts with the material, by the technique I am discovering. I am very thankful to artsnb for their support – this new direction would not have happened without the Creation Grant I was fortunate to receive.

The gift of time that grant funding has given me. Being free to spend precious time in exploration, making for the joy of what you are doing. Having the money for materials, money to receive help from others to complete work – these are so very rare, and so very important for growth. Being allowed to wander along new paths and to recharge creativity, all priceless.

Alanna Baird is an artist working in many different mediums including metal work, ceramic, print and paint. Alanna is located in Saint Andrews, New Brunswick where she practices in her home studio. You can learn more about Alanna and her practice through her website. 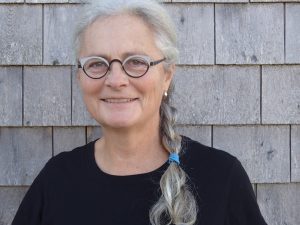