I had the impression something special had occurred when the last 6 Elle lines of of poetry were spoken in a lush silence from the loft of Église historique de Barachois, as the last notes of the ensemble delicately reverberated in the mind. Thus ended Conversations2019. The previous 993 lines were sung by Elle and spoken by Lui, distributed into 10 volumes of 100 lines, each one complemented by a different musical ensemble. The volumes’ ranged between 1 to 2 hours in duration, all ten volume took place—in sequence—over 5 days with performances of 2 volumes per day.

Conversations2019 took place from August 11-16, 2019. It was the culmination of my decade long project of setting Herménégilde Chiasson’s 1999 GG winning poem, Conversations. It was a massive task that began innocently enough in 2009. Canadian soprano Andrea Young simply asked me to write her a piece for voice with piano. For this I used the first 100 lines of Herménégilde’s epic poem. She premiered the new piece in Vancouver in 2010. That first composition set into motion the large scale creative journey, which was to eventually set the entire 999 lines of the poem to music. Initially, the idea only swirled inside my head as a thought, or a possibility, but eventually it did manifest onto paper. Last past August, ten years later, ‘Conversations’ arose from that paper as actual sound vibrations made by a humbling assembly of enormously talented musicians hailing from, here, the UK, Montréal, New York, Providence, and Los Angeles. For the next five days, the musicians skillfully navigated through the 10-volume score of ‘Conversations,’ infusing with sound and ambience the August ocean air of Grand Barachois, New Brunswick. In my opinion, the best possible place to have brought the unabridged project back ashore.

After the first volume was completed in 2009, I received support for one year from the Canada Council for the Arts to continue the project. From 2012-2013 I set 600 more lines. At this point volumes 1-7, and 10 were complete, alas, I still had 200 lines left, but needed to move on to other projects. In the years that followed, volumes 1, 3, 5 of “Conversations” had been premiered in Canada, the USA, and in Germany, with Andrea always singing. Since roughly 2015, she and I had bandied about the idea of performing the entire cycle, perhaps even in Grand Barachois at the old magnificent church, so we sought and secured funding for exactly that. One detail: two volumes were outstanding.

In 2018, I received generous support from artsnb to compose these two remaining volumes, which would in turn, completed the cycle. Without their support, this would have been near impossible to have those hefty missing pieces ready for August. What made this project interesting to me, but also challenging was that I had to return to a composition that I had not touched for 5 years. I had to re-enter that frame of mind. You see, my treatment of Conversation (the poem) is an unusual confluence of music and words. Though the Elle part is sung to music (the Lui parts is mostly spoken), I consider it more as an “extroverted articulation” of the poem—fully musical, but also reserving the form of the poem. This setting brings to life a sizeable literary work, echoing Mr. Chiasson’s penchant for long form, with each volume being at least one hour in duration. The music’s character mirrors the poem’s thoughtfulness and gravitas. In writing techniques, Chiasson and I use particularly crafted constrains to guide creative motion and to generate a unified aesthetic world. In composing these new volumes, I was required to return to my original compositional thinking of 2012-13, but with five years of artistic growth and experiences.

As I settled in to do my unfinished business, that growth and experience was both and blessing and a curse. A blessing because in that five years, I composed and created many works new, a number of which were supported by artsnb. In this continued practice I refined and honed my techniques, so when it came time to compose the remaining volumes, I was able to understand my task and had the strategies accomplish it. However, I had to naturally compose music that followed the aesthetical pathways of the volumes that came before to some extent, but I also desperately wanted growth to be evident in these new volumes. The artsnb support gave me the freedom to approach this as was necessary; I was able to take time to contemplate, study, and creatively think of the best approach to get to where I need to take the work, and for that I am grateful.

Have you received artsnb funding? Are you currently working on a project done, in part, thanks to artsnb? Are you interested in writing an article for the artsnb Featured Artist Blog? Get in touch with our Communications Officer to get started! 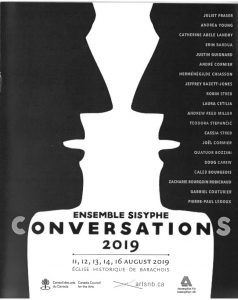