UTUKKU AT THE RIO WEBFEST

While at L’inis (the National Institute of Sound and Image), I had the opportunity to create a 3×5 minutes web series titled “Utukku” (script: Edith Kabuya, production: Fanny Bissonnette). This horror comedy tells the story of Vielda, a young girl who decides to take revenge on her worst enemy. She does not realise the fateful consequences her actions will have… On the menu: bullying, shamanism, a demonic doll and a 90’s vibe.

Our project stood out both in Canada and internationally, with several nominations from Toronto to Votkinsk (Russia), via Bilbao in Spain. “Utukku” has won the Bronze Award and Student Award at DC Web Fest (Washington, D.C.) as well as the Best Horror Award at the Hollyweb festival (Hollywood, CA).

When I heard of our selection at the Rio WebFest in Brazil, I instinctively decided to leave for Rio de Janeiro. At that time, I had just finished a month-long stopover in Alberta as part of my duties with Wapikoni mobile; an organization that offers film workshops to Indigenous communities. Since my contract with Wapikoni was about to end, I had a bit of free time. Moreover, the Career Development program deadline was still achievable. After all, perhaps this idea to fly to Brazil was not that crazy. Fortunately, artsnb was there to support my project. One week after my contract was over, I was on my way to Brazil. It left me very little time to plan everything, but I still decided to add a few extra weeks to my trip, at my own expense, to see the country. You must understand that for me, the idea to see Brazil was not new…

Brazil, apart from its beautiful beaches, is art, everywhere, all the time. Whether it is in the omnipresent music in the streets, or in the murals tattooed on its walls…

The Rio Webfest took place in Barra Tijuca, a neighborhood along the sea, west of Rio de Janeiro. I stayed with a nice woman named Monica, and as soon as we started chatting on the Airbnb app, I had to dust off the little Portuguese I learned from Duolingo and from the first season of “3%” on Netflix. A few minutes walk from her doorstep, I had access to the “Cidade Das Artes” (City of Arts), the core of the Rio Webfest. This building bears its name well, with its futuristic concrete structure and its soft yet stern forms. The showing of my web series was on the first day. There, a panoply of works filled me with inspiration throughout the next five days of the festival. I had the chance to meet filmmakers from all over the world and exchange with them about their artistic vision, while sipping caipirinhas, the characteristic Brazilian cocktail. Cachaça, lime, sugar and boom! I have new friends and potential future collaborators.

On the night of the awards, I was sitting in the front row with the other foreign filmmakers. “Utukku” was nominated in four categories: Best International Web Series, Best Editing, Best Female Performance Action/Fiction/Thriller/Horror (Léanne Désilets) and Best Action/Fiction/Thriller/Horror Direction. Even if I didn’t leave with a trophy, the experience was worth it and frankly, it would have been a burden to continue my journey with four trophies in my backpack! Because my trip was not over.

Brazil, apart from its beautiful beaches, is art, everywhere, all the time. Whether it is in the omnipresent music in the streets, or in the murals tattooed on its walls, Brazil has charmed me. But like any love story, you end up seeing little flaws that make the experience more real, more personal. Out of the tourist networks, vigilance is recommended. For example, on my first evening in São Paulo, I saw a man take a cab driver hostage at knifepoint. During my 5 weeks of travel, most Brazilians admitted that the country was politically sensitive. Everywhere you look, movements like “Ele Não” (Him, No), seek to expose the actions of the extreme right, led by Jair Bolsonaro, President of Brazil. This being said, it is because of its resilience that Brazil stands out. The culture, atmosphere, welcoming people, and above all, its artistic fiber, make this country a rare pearl. It is an inexhaustible source of inspiration for any artist. I will certainly return one day, perhaps to stand, once again, on the ground of the Cidade Das Artes.

Since his childhood, Mathieu Laprise has been scribbling little monsters in his math notebooks. He explores the forests of New Brunswick and captures his reality and his imagination in small black boxes.

After his participation in the show “La Course Évasion autour du monde”, he decided to make a career behind the camera. Thanks to two scholarships granted by Unis TV, he deepened his skills at L’inis. His passion for images has led him to work and travel in about thirty countries, including Jordan, Mali and Colombia.

His work in television has been broadcasted on several channels. He has also won several awards for music videos, web series, and short films. 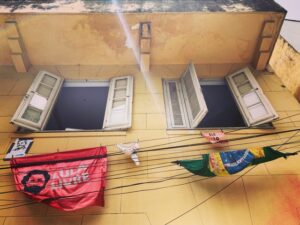