How collaboration deepens the questioning to release the truth.

It’s a mysterious unfolding that brings forth the bones of a piece. An initial question or curiosity can branch in many directions. Being open to more questions is the beginning of finding the work’s truth. Collaboration can deepen the questioning and fortuitously reveal a glimpse of what will become. For this reason, creating with a collaborator can be cathartic. When I choreograph, I’m waiting for a personal connection to metamorphize from the subject matter. It can be a very freeing feeling, allowing myself to identify in some way to the subject matter of my work. On my own, that can be difficult to find. To make connections, we need someone else to ask the questions we aren’t asking ourselves. In one vessel, there’s a teacher and a student. In two, there are shared ideas that release new impulses.

Creating Who is Jane? with Nienke Izurieta was a process where openness and trust were pivotal to its creation. Who is Jane? is based on The Yellow Wallpaper by Charlotte Perkins Gilman. Published in 1892, it was a controversial feminist piece about the misdiagnosis of postpartum depression and the ‘rest cure’ prescribed for what people deemed as hysterical tendencies. The subject matter of the work is dark, and in order to reveal the bones of the piece, we had to ask difficult questions. We wanted to understand the narrator and give the audience something they could feel.

The book examines the oppressive nature of gender roles imposed on women. This theme leads to the descent of the narrator’s insanity when she’s isolated and forbidden the freedom to assert her identity. Nienke and I spent our early days conversing about the book, its tone and images. We wanted to tell the story of the decay of identity and we wanted to use the narrator’s experience to do that. The main challenge was abstracting literal ideas to tell a story while still keeping the authenticity of the narrator. Being authentic meant understanding the character on some level.

The story is centered around a room in an isolated mansion. Nienke’s small studio provided a confined space for restricting my urge to dance big. The incongruity of large outward movement turned inward; this was how we began to understand the feelings of isolation. This method helped to achieve the bleakness and horror of the narrator’s experience, while delineating both physical and psychological nuances of the story. Nienke’s music was also trajectorial in how our initial impulses paved out the story. Nienke’s composition is beautifully haunting and created an atmospheric fuel to create movement with. The movement was not always analogous with the music (a choice we made to create tension). The narrator’s exact experience is not something I can relate to, but the emotions I felt during this initial process were embodied and became personal, releasing more questions about what she endured and the effects of isolation.

One such experience is her obsession of the wallpaper in the room. She’s convinced she sees a sub-pattern of a woman trying to get out. That image is symbolic to the narrator’s mental state and the overarching theme of oppression. Nienke and I wanted to use the wallpaper and its sublayer to show the complexities of how the narrator’s disparity of losing herself was how she finds herself. It was important to illuminate how the room transforms through her lens. Her obsession of the wallpaper and its sub-pattern, we discovered, could be created using shadow. Once we began exploring, we felt an immediate shift in the clarity of the work. The truth we were digging for had surfaced. Nienke creating shadow behind a screen allowed for all improvised movement to be impulsive and reactionary. The shadow of tearing paper exposed an elusive element that allowed for further questioning of who Jane was and what was at the crux of her decline. At this point, we knew that truth was not about finding answers. It was about exposing the cruelty of mental illness.

The themes associated with isolation are serendipitous to our current situation. At the time of its creation, we had no idea of what was looming. This piece was performed as a work in progress in November 2019. Today, the feelings of isolation seem all too real for many and I wonder how the dueling consciousnesses of emotion and reason interact, given these new circumstances. I move forward with this story, with new collaborators, in search of more truth to uncover more about myself and my subject matter.

Marcia is a dancer, choreographer, collaborator and educator based in Saint John. She shares her passion for creation working collaboratively alongside musicians, visual artists, filmmakers and dancers. Marcia’s work has received recognition by the New Brunswick Arts Board and Saint John Community Arts Funding Program. Interested in the stories of strong women, Marcia’s process involves abstracting literal ideas while still keeping the authenticity of the character. Fueled by collaboration to gain more than one interpretation, Marcia’s drawn to understanding experiences and embodying ideas to expose any personal connections that metamorphosize. 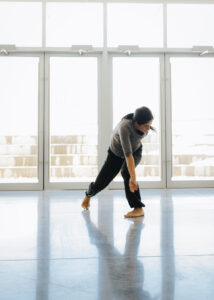