I received artsnb creation funding for my short film Cicerone (at that point titled Ride Along) back in March of 2020, so our production was delayed a few times due to COVID-19. In that downtime, I also received the Short Film Venture award from the NB Film Co-op, Telefilm Canada, and the Province of NB. This made ‘Cicerone’ the largest project I had ever produced.

While it did put a lot of pressure on me, it also freed me up creatively in many respects, and allowed us to pay our crew and collaborators. We finally went into production in September 2021, and post-production wrapped up in May of 2022. It was a long journey, full of heartache and joy, and I cannot wait to do it again.

Art is important in understanding our lives and the world around us. It allows us to reflect and heal, to make connections and get closer to one another. Most importantly I think it broadens our minds and builds compassion and community.

I wanted to explore toxic masculinity with this project; the ways that myths of masculinity are formed and upheld through genre cinema; the ways in which codes of masculinity contribute to a culture of domination and brutality; the fascination with and idolization of violent men; and ultimately choosing sensitivity over cruelty. Basically, “what if a guy who cries made a tough-guy picture?”

When I first started writing the script, I mostly just wanted to make a gangster movie. I threw in my favourite pieces of the genre, imagery I liked, a twist here and there, but it felt impersonal. Throughout the writing process I realized that I needed to find out why I felt compelled to tell this story. This began with the question: what do I find so fascinating about gangsters? There is an intoxicating bravado to the movie gangster, the idea of doing whatever you want, no matter the cost. But it’s the cost that draws me in, I think, the human cost, the selling of one’s soul for wealth.

In the film, the protagonist pitches his script as Melville meets Bergman, and that’s (hopefully) what my own script became: the cool allure of Le Samourai with the existential introspection of Winter Light. I think that this act of finding my creative voice really helped me grow as an artist. I feel as though I put a piece of myself into this script in a much deeper way and I feel much more secure in how I see myself as an artist. I started out wanting to make something simply cool and ended up pleading for a world with more empathy and caring.

I think starting out making films, I struggled to find my voice, my need to tell a story. Often though, it would find me. My sensibilities and personality would always show through somehow. Moving ahead, I feel that I just need to write honestly and to put myself fully into the work, even if it feels vulnerable, because the art is much richer for it.

I’ve always found genre constructs/rules/norms to be fascinating. My last film Sister’s Dirge (below) was an exploration of the Western genre, its depictions of violence and who got to be the hero. That project was about Missing and Murdered Indigenous Women and Girls, so the themes of toxic masculinity and male violence came to the forefront. For me it is very personal: I grew up as a boy (playing sports, going to school, watching movies) and there was often a pervasive undercurrent of violence. It’s been brushed off as “boys will be boys” for far too long, and we need to come to terms with the fact that the traits that society has coded “masculine” are often conducive to violence. When we teach young boys to bottle up their feelings, and value strength and domination above all, we are creating a powder keg, inevitably bound for violence. So through my art, I’ve tried to break down the myths of masculinity and question “what makes a good man?”, “Am I a good man?”, “how can I be part of the solution?” and overall just offer a bit of empathy and compassion into the world.

I’ve found it most rewarding to use art to ask a question and learn a little about myself along the way. The aspect of collaboration in filmmaking is especially rewarding. I worked with so many wonderful, talented individuals on this project, and they each brought their own unique ideas and really brought it to life. Collaboration is an integral part of my work as a filmmaker. Collaboration informs the entire process; at the very beginning, through brainstorm sessions and writing workshops; in production it plays a huge role, possibly the most important. The success of the film hinges on the people you surround yourself with. I was lucky enough to work with brilliant, talented individuals who brought their unique skills and sensibilities to the project. Costume design, production design, makeup/SFX, sound, camera; all play such a major role in the grand scheme. Working with actors is a great collaborative element too, as they bring their life experiences and their own ideas to the characters.

Postproduction is where I find the most possibilities for cross disciplinary collaboration. I had the chance to work with composer Zachary Greer as he crafted the score. This was a very fulfilling and fruitful collaboration between disciplines. Zachary’s score sets the tone, adds to the mood, and really completes the picture, and working through experimental sounds with him was a blast. Even though sound falls within the realm of film, it is a craft of its own, and working with Bruce LeGrow was another fruitful collaboration. Sound is as important as picture, and he was able to breathe new life into the edit, help to tell the story and contribute to the mood and tone.

Finally, I collaborated with graphic designer Jesse Giffin (my older brother) on the poster. This cross disciplinary collaboration was the final cherry on top, and the wonderful poster he created is the ultimate representation of the film that will market it and hopefully draw viewers in. At the end of the day, it’s a team effort. It could not have happened without the amazing cast and crew, and we were each able to put a small piece of ourselves into the work.

Art is important in understanding our lives and the world around us. It allows us to reflect and heal, to make connections and get closer to one another. Most importantly I think it broadens our minds and builds compassion and community. I think that New Brunswick could use those things as much as anywhere else, especially so during these difficult, tumultuous times. We can band together to createinstead of destroy.

I believe the greatest challenge for NB artists is setting ourselves apart from the larger industries of Toronto and Vancouver, but I also think this is our greatest advantage. We are a small but mighty group of artists, and this fierce independent spirit allows us to push the boundaries of our art forms beyond what may be possible elsewhere. I am very excited by what I see happening in NB, especially in the film community.

Currently, I have a few scripts in the early stages but mainly I am just working through the distribution of Cicerone. I am very excited to screen it at festivals and hopefully travel around with it. I am also working at colour grading Ry O’Toole’s feature film Further than the Eye can See and I am very excited about the look we’ve created. There is a heightened, poppy texture we’ve crafted that I’m particularly excited about!

Ty Giffin is a filmmaker based in Fredericton, NB. He works as a videographer at UNB Media Services. He has two cats and a partner, all of whom he adores. 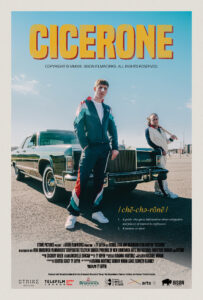